04. Mar 2021
The big Australian Earth Science event of 2018 is almost upon us - AGCC 2018! https://www.agcc.org.au/ In addition to the technical sessions, please come along to a Sedimentologists gathering! This informal meeting will hopefully be a great opportunity to get together with lovers of sedimentology from across the country and overseas, to meet old friends and makes some new ones. We hope to see you there, 6-7pm Tesday 16th October, meeting room R4. The full program has now been released, and it is looking to be a most excellent meeting. For the sedimentology community, there are a lot of sessions to keep an eye out for,some of which are: - Source-to-sink sedimentary Basin Processes - Advances in structural, igneous metamorphic and sedimentary geology - Prediction, Process, Place: Geomorphology - Understanding the Surface - Earth's Climate, Past, Present and Future - Marine Geoscience - the Evolving Oceans - Ancient and Historical Record of Life in Australia - The Origins and Development of Life - Mass Extinctions - Petroleum and its co-products - Groundwater challenges and opportunities - The National Virtual Core Library - Planning the Future of Geoscience - Geoscience aspects of the storage of energy related waste - Geoscience data delivery - Ediacaran and Cambrian Symposium - Mathematics, modelling, AI, robotics and machine learning applied to the acquisition and interpretation of large or complex geoscience data sets - Geohazards, risk and mitigation - Geology in Society: geotourism and geoheritage - Geobiology - Optimisation and uncertainties in Earth models - Making better exploration decisions through an integrated geoscience approach

What a great conference! AESC certainly delivered some top notch research presentations this week. My highlights from the last few days of the conference have been at very different ends of the geologic timescale - Southern Hemisphere Quaternary, and Neoproterozoic Earth. The resolution of investigation and interpretations are strikingly different when listening to presentations on these different ages of succesion. We heard from several high-resolution palaeoclimatic interpretations from lake, marsh and ocean cores, helping to shed light on key research questions such as what reconstructions of hydrological variability from around Australia can tell us about continental scale and global atmospheric climate during the Quaternary, the reconstruction of the position and strength of ocean currents, and whether hydrological variability and increases in dust accumulation could be related to megafaunal extinction. Dust also featured in the final plenary presentation by Prof. Paul Hoffman about Snowball Earth, which also highlighted the role of cap carbonate sedimentology, stratigraphy and geochemistry in our reconstructions of this time. The usefulness of detrital zircon chronologies for piecing together the palaeographic reconstructions of ancient basins was seen in several presentations.The next AESC won't be for another two years, but there are tentative plans in the pipeline for a GSA Sedimentology Group field workshop during 2017. Watch this space!

The Australian Earth Sciences Convention is off to a great start today with some excellent sedimentology presentations. Highlights included the Reservoir Analogues session talks, including an interpretation of the Durham Downs gas field fluvial reservoirs, a modern study investigating why rivers avulse, a detailed outcrop investigation of fluvial-deltaic and salt-withdrawal minibasin deposits in the Flinders Ranges, and an investigation of the influence of organic matter on dynamics of clay sediment gravity flows. Another highlight was the full day of presentations on the scientific results of the International Ocean Discovery Program. We're looking forward to the next 3 days of the conference! 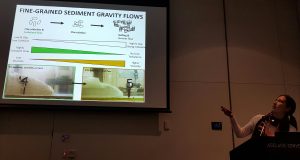 The program for the upcoming Australian Earth Sciences Convention is now published, and it looks like there will be some excellent sedimentology and stratigraphy presentations. There will hopefully be a meeting of the GSA Sedimentology Special Interest Group during AESC; we’ll post an announcement here when it is arranged. Hope to see you there! 26-30th June, Adelaide Convention Centre. www.aesc2016.gsa.org.au