04. Mar 2021
There is a new call for HIGHLY EXPERIENCED ANZ SEDIMENTOLOGISTS to apply for a position on IODP Expedition 371. For shipboard scientist responsibilities see http://iodp.tamu.edu/participants/scientist_jobs.html. Deadline of November 7, 2016. This is a wonderful opportunity for suitable ANZIC scientists to join Expedition 371, which will sail from 27 July to 26 September 2017. The chance of an excellent applicant being accepted is clearly high, as a clear lack of expertise has been identified. For the sedimentological position, experience of shipboard core analysis, and ideally ODP/IODP experience, would clearly be an advantage. Brief outline: The Tasman Frontier expedition (based on IODP Proposals 832-Full2, https://iodp.tamu.edu/scienceops/precruise/tasman/832-Full2.pdf) will investigate the Eocene Tonga-Kermadec (TK) subduction initiation (SI) and evaluate whether a period of high-amplitude long-wavelength compression led to initiation of TK subduction or determine if alternative geodynamic models were involved. Core and log data from boreholes in the Norfolk Ridge, New Caledonia Trough, Lord Howe Rise and Tasman abyssal plain will provide constraints on seismic stratigraphic interpretations and the timing and length scale of deformation and uplift associated with the largest known global SI event and change in plate motion. The Paleogene and Neogene sediments will also constrain paleoceanographic changes caused by SI as well as tropical and polar climatic teleconnections and the transition from greenhouse to icehouse climate states in a region with large meridional variations in surface water properties in a strategic ‘Southern Ocean Gateway’ setting. ANZIC applications Australians should visit www.iodp.org.au for a link to the application form, a completed version of which should be sent to Neville Exon (Neville.Exon@anu.edu.au) and Rob McKay (robert.mckay@vuw.ac.nz). New Zealanders should contact Giuseppe Cortese (NZODP@gns.cri.nz). Don't hesitate to contact us for more information or advice. Applicants should bear in mind that their applications will be firstly reviewed and ranked by ANZIC and, if they pass that hurdle, by the expedition co-chief scientists. Clearly, they need to convince both groups that they would be excellent in the role. Note that non-tenured applicants must have a position at an Australian or New Zealand member institution for at least one year and ideally more after the expedition, to enable them to carry out the necessary post cruise research. As well as the form, applicants should provide, all in a single PDF: 1. Participation Plan and Budget (maximum of four pages): This should set out why ypu are interested in the expedition, how your skills suit the position applied for, what you would bring to the expedition, and the nature of your initial post-cruise research plans (including publication plans), and a brief outline of what budget you might need beyond that covered by their institution. Normally, to maximise the return to ANZIC from the involvement of our scientists on expeditions, we ask that applicants endeavour to assemble a team, including ANZIC scientists, of potential land-based science party members in various fields, set out who has agreed to join that team if you are successful, and what they would aim to do post-cruise. The potential existence of such a team, which would provide additional analytical and scientific skills, would strengthen the applications. If all went to plan, the team members could become part of the land-based science party, and thus get early access to material from the vessel. Of course, final research plans will depend on the material actually recovered by the vessel, and negotiations aboard ship as to who does what. There may not be time to do this in this case, and the main thing is to get in a coherent and convincing application for yourself. If you can indicate the nature of a team that may join you, please do so. 2. Curriculum Vitae including selected publications (maximum of two pages) 3. Letter of support for non-tenured applicants by their supervisor: This should cover general support from the institution for the application, include an outline of the proffered post-cruise support, and indicate when the present position will end. For ANZIC scientists all travel costs would be covered. In addition the ANZIC IODP Office may provide up to $A40,000 for post-cruise activities (mainly analytical costs) for Australian and New Zealand university and research institution scientists and post-graduate students, if funding cannot be obtained in any other way. Applications for such funding can only be made after expeditions are completed and samples are in hand. The deadline for scientists to submit applications to ANZIC is Monday, 7 November, 2016.

The University of Tasmania (Australia) is inviting applications for two PhD projects in submarine volcanology and sedimentology. Formal application deadline is mid-October, and candidates should make contact ASAP. The first project is based on the products of the deep submarine eruption of Havre in 2012 (Kermadec arc). The second project is based on consolidated samples from the IODP Expedition 350 in the IBM rear-arc, and may be linked to other past IODP expeditions. The candidate selection is highly competitive amongst the University, and we are seeking an applicant with at least one published article in a peer-reviewed journal. The student would be part of the dynamic Submarine Volcanism Group at the University of Tasmania, and would benefit from a large panel of experts in Earth Sciences in general. Geology and Oceanography at the University of Tasmania have received the maximum grade of 5 in the 2012 Australian ERA rankings (i.e., ‘well above world standard’). The Faculty hosts the world-class ARC Centre of Excellence in Ore Deposits (CODES), and the Central Science Laboratory at the University of Tasmania has world-class geochemical instruments. Project 1: Sediment transport during and after the 2012 deep submarine eruption of the Havre volcano (Kermadec arc) Supervisors: Dr. Martin Jutzeler (U. Tasmania, Australia), Dr. Rebecca Carey (U. Tasmania, Australia) and A/Prof. James DL White (U. Otago, NZ). Very little is known on the transport and sedimentation processes occurring in association with deep submarine eruptions and their aftermaths. This project aims to: 1) Identify and characterise various syn- and post-eruptive sediment transport associated with the products of the 2012 deep submarine Havre eruption (Kermadec arc). Available data include exceptional ROV video footage, high-resolution bathymetry, and sediment samples collected during a cruise in 2015; 2) Reconstruct the general sedimentation pattern around the Havre volcano, including the various currents in the water column; 3) Analogue sedimentation experiments with mixed components in water tanks and flumes. Project 2: Provenance of volcaniclastic units from IODP 350 cores, and creation of a facies-based database for submarine volcaniclastic deposits Supervisors: Dr. Martin Jutzeler, Dr. Rebecca Carey, Prof. Ray Cas (U. Tasmania) In 2014, the IODP 350 expedition drilled at proximity of volcanic seamounts in the Izu-Bonin-Mariana rear-arc. This expedition was part of a huge investment from the international Earth science community to understand evolution of volcanic island arcs and formation of continental crust in a global perspective, and through three IODP expeditions. From the collected cores, there is a strong opportunity for outstanding and innovative research on submarine sedimentology and volcanology. IODP Expedition 350 recovered more than 1,800 m of in situ sediments from a volcano-bounded basin and a volcanic apron in the rear of the Izu-Bonin-Mariana arc, giving an exceptional proximal to distal record of submarine volcanic activity during the Miocene to the Quaternary. The cores used in this project would be multiple well-preserved, consolidated volcaniclastic deposits from the lower part of the hole (Units II to VII). This extensive dataset will provide an outstanding record of submarine explosive eruptions, providing temporal constrain on frequency and types of eruptions from underwater volcanoes. It will be the base of a global dataset for submarine volcanogenic facies. This project has large implications on transport and sedimentation processes during subaerial and submarine eruptions, style of submarine volcanism, provenance of sediments, eruption periodicity, etc. Additional research on samples from other IODP expeditions (126, 340) and possible onland deposits (e.g. USA, Japan) is likely. For interested applicants in either projects, please send your CV, with name and address of 1-2 referees to Martin Jutzeler at: jutzeler@gmail.com

The International Association of Sedimentologists (IAS) have launched a new app for the journal Sedimentology, available free for iphones and ipads. If you're a subscriber, you can now read the journal via the app - you can link the app to an institutional subscription as well as a personal one. Lets hope they're working on bringing one out for android soon too! 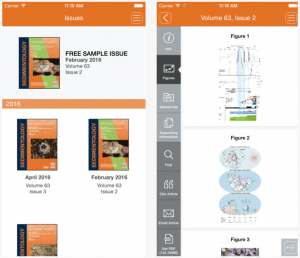 Worth a read, and thinking about what we can all do to increase diversity when nominating deserving people for professional society awards. 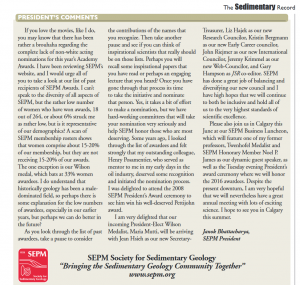 School of Geography Faculty of Science Salary: $92,654 - $110,022 p.a. plus 17% superannuation Employment Type: Full-time (continuing) The Faculty of Science seeks applications for a teaching and research position in its newly established School of Geography. We require candidates with internationally recognised research records and an excellent track record of teaching, relative to opportunity. The scholarship of successful applicants will fit well with one (or more) of the existing physical geography research strengths of the School: biogeography and palaeoenvironments and earth surface processes. Environmental change is a cross-cutting theme across our research strengths and is analysed with reference to both social and natural sciences. The appointee is expected to lead a research program of exceptional promise that will attract postgraduate students, engage international collaborators and secure external research funding from national competitive research schemes, as well as potential industry partners. The appointee will have a core commitment to research, and will also teach within the School's undergraduate and MSc programs, and supervise research students at undergraduate, MSc and MPhil/PhD levels. Close date: 15 May 2016 Link to website: http://jobs.unimelb.edu.au/mob/caw/en/job/887859/lecturer-in-physical-geography

PhD Opportunities in sedimentology and sedimentary provenance studies of intraplate orogenic-related sedimentation We are seeking 2 high-quality PhD candidates with either strong field-based research interests in sedimentology or detrital mineral geochronology to be part of a collaborative, multi-disciplinary research program investigating the Carboniferous sedimentary record across eastern Australia hypothesised to be linked to intraplate orogenesis. Further details on the projects can be found at: http://www.earthworks-jobs.com/geoscience/qut13091.html Interested applicants will need to apply for a PhD scholarship through the university. Further information, and to begin the on-line application process can be found at: http://www.qut.edu.au/research/scholarships-and-funding/research-scholarships Applications close at 11.59pm on 13 October 2013 (Eastern Australian Time). Projects would start in early 2014. For more information please contact Dr Scott Bryan: email scott.bryan@qut.edu.au

Senior GNS Science Geologist Mark Lawrence has taken over as the new convenor and representative for New Zealand here at ANZsed. Watch this space for new updates and activities...

Hi everyone, sorry its been quiet here lately. I distracted myself from some marking today by wondering what my favourite sedimentology movie that I use for teaching would be. I came up with two, and thought I'd share them with you, along with a request for you to share your top online sedi movies here too. I'd love to see them! This is my favourite one, and never fails to entertain my students. I expect they're entertained equally by this movie and my enthusiasm for it. Make sure you've got the sound on (loud is good, if you're into dubstep!).


This one is great for teaching, make sure you check out the still photos of the deposits at the end.

Researchers with an interest in submarine landslides are invited to a day of presentations and discussions on submarine landslide research in New Zealand and further afield. A delegation from Kiel University and GEOMAR in Germany will be visiting and we are taking the opportunity to bring the New Zealand submarine landslide research community together. Anyone with an interest in this topic is welcome to join us, and to give a short presentation of relevant research if they wish. There is no fee for the workshop. Please indicate your intention to attend, including a presentation title and brief abstract if relevant, to the email the convenors on the addresses shown by 1 November.   When: 19 November.      Where: GNS Science, Avalon. Wellington.   Convenors:         Christof Mueller (c.mueller@gns.cri.nz),     Joshu Mountjoy (Joshu.Mountjoy@niwa.co.nz)