Correlating nonmarine strata is a major challenge for any academic or industry geologist. The idiom “there are as many interpretations as there are geologists” usually pops into one’s mind when geomodels of fluvio-lacustrine strata are presented in journal articles or in meetings discussing drilling proposals.

Fluvio-lacustrine lithofacies elements are more often than not heterogeneous and laterally discontinuous at the decimetre scale. One only has to go to an outcrop to see what has to be contended with in the subsurface (and worse still if you only have well logs and cuttings as your dataset!). 3D Seismic has substantially improved subsurface mapping of these systems in the past decade, but one thing remains to be resolved – defining meaningful chronostratigraphic surfaces for basin-wide correlation.

Without widespread marker beds, marine influences or a biostratigraphic scheme tied to the international geologic timescale, stratigraphic models of fluvial systems are open to interpretation and can go wrong very quickly at scales larger than the average size of a typical gas field (~10km2). Geomodels and well plans may look spectacular on a computer screen, but if a chronostratigraphic surface is mis-picked, it could have expensive implications for the prediction (and drilling) of reservoir-seal pairs.

One solution is to radiometrically date a series of coeval volcanic ash-fall tuff beds across a basin. Dating zircons within these tuff beds using the high precision CA-TIMS technique (short for chemical abrasion thermal ionization mass spectrometry) from the ratio of uranium and lead hosted within each crystal allows radiometric ages to be determined within an error margin of “40kyr”. Correlating by radiometric ages within a defined error margin over large distances brings certainty to nonmarine correlation – rocks which have been dated at a specific depth in any the well are time equivalent, or they are not! 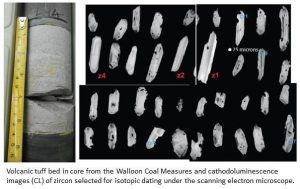 This technique has been applied for the Jurassic Walloon Coal Measures of the Surat and Clarence-Moreton Basins of Australia, infamous for its thin, discontinuous coal beds. Radiometric ages have not only revealed the Walloon Coal Measures to be younger (Late as opposed to Middle Jurassic) than anticipated from palynology, but has revealed diachroneity in the lithostratigraphic base of this stratigraphic unit between the two basins – a whole 2 stages of Jurassic (Bathonian and Oxfordian). The ability to define chronostratigraphic surfaces over 100‘s of km has revealed thinning of this stratigraphic interval from east to west, but also the role syntectonism played in sediment dispersion and the continual movement of peat mires across these basins on timescales of less than 1 million years. The same dates will enable correlation to be undertaken on regional scales for precise palaeogeographic reconstructions, important for resource prediction. Although the high abundance of volcanic air-fall tuffs (10+) in the Walloon Coal Measures is more of an exception than the norm, if fluvial sandstones comprise a volcaniclastic component and are thousands of kilometers from known sources of volcanism, they too contain zircon that can be dated using CA-TIMS to determine the maximum age of deposition for these rocks (and subsequently correlated). This technique has the ability to save time, effort and the ambiguity associated with exploring nonmarine strata.